Features of the RCC building in Ekaterinburg

HPBS experts have been on the excursion in RCC Headquarters in Ekaterinburg, established by the world-known architectural firm Foster + Partners. Along with foreign specialists, the Russian companies participated in the construction that allowed them to expand their competencies and master the latest world technologies and work standards.

The Rose Gold, the basic colour of the building, the building’s borders, materials, and design set the style for the whole neighborhood. There are 5 colours in the buildings and the bright spot here is PEOPLE. The RCC building is the Louvre from the engineer’s perspective. 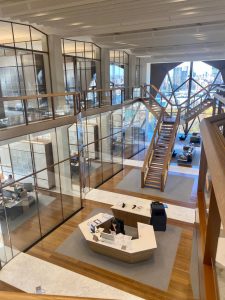 The appearance of the building is inspired by the structure of the crystal lattice of copper. In addition to the aesthetic function, the crystal’s modules play the role of the climate regulator inside. The angle of inclination and the position of the metal and glass edges help naturally regulate the light and the temperature according to the season. Thanks to them the rooms in the buildings receive natural light in the winter and protection from overheating in the summer.

The absence of blank walls, the glass partitions with thin metal frames add lightness, air, and light to the room. The big open spaces inside the RCC Headquarters required special resolutions to improve the acoustic.  The problem was solved using buffers or acoustic deflectors. Along with a key function, the constructions became the complete part of the Headquarters’ interior. Carrara marble was chosen as a basic material for floor covering.

All employees have similar comfortable conditions for effective work. The internal glass partition provides for maximum daylight and the permeability of the workplaces. Despite the apparent ease of the construction, all elements were tested according to security requirements and soundproofing and received expert opinion on the reliability.

All construction and finishing materials, as well as equipment and furniture, have Russian and international certificates of conformity. Temperature and other air parameters are controlled automatically. Ventilation ducts, heating, and air conditioning systems are hidden in floor niches, as well as inside walls and built-in wardrobes. Employees can set the required temperature and lighting level in the office by themselves using touch control panels installed in each office. At the end of the working day and on weekends, the life support system of the facility goes into sleep mode: the intensity of heating and ventilation reduces, the illumination of the premises decreases. This reduces energy consumption. In the morning, the building independently launches all systems into normal mode to prepare the offices for the start of a new working day. 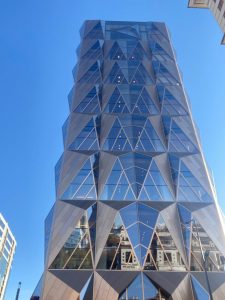 A feature of the project of the RMK Headquarters is that the internal lighting system simultaneously serves as illumination of the building’s facade. Thanks to the large-scale glazing, the object glows from the inside with a backlight at night. During calculations were taken into account cardinal points that each face of the building faces, the degree of reflection of surfaces, the configuration of windows, and the characteristics of lamps. In the work areas, part of the light is directed upwards and reflected from the ceiling. Pendant lights are an innovative solution that provides high-precision light distribution and the most efficient energy consumption. The combination of reflected and direct light above the workplaces provides visual comfort and reduces fatigue.

Even at the construction stage, RMK’s headquarters drew the attention of residents and guests of Yekaterinburg. With the completion of the works, the facility has not only become one of the architectural dominants and points of attraction of the central part of the Ural capital but has also caused positive changes in the appearance of the surrounding areas.

The RMK headquarters building has no fences, it is open to passers-by, and this is emphasized by the panoramic glazing of the lobby area on the first level. The unique architecture, the play of light, glass, and metal make the pictures incredibly beautiful. Sincere gratitude to the teams that were able to implement this level in Russia.

Russian Copper Company is one of the largest copper producers in Russia. Founded in 2004 in Ekaterinburg, it has production assets in the Chelyabinsk, Orenburg, and Novgorod Regions, as well as in the Khabarovsk Krai. In addition, the company’s enterprises operate in the Republic of Kazakhstan. They carry out a full production cycle – from mining and concentration of ore to production and sale of finished products.