Climate change will lead to changes in the economy

The head of the largest investment company BlackRock, Larry Fink, in an annual letter to the CEO, urged executives to pay special attention to global climate change.

“Climate change is leading to a deep reassessment of risks, and we expect a significant redistribution of capital” 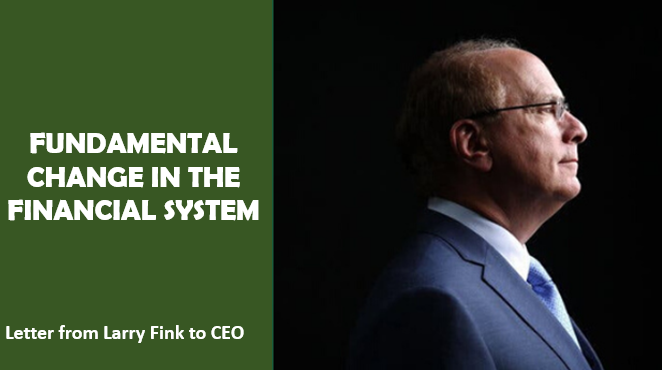 Climate change has become a determining factor in the long-term prospects of companies. According to Fink, the society will soon face strong changes in the financial system. Particular attention should be paid to the adaptation of companies to the changing climate, including investment.

The head of BlackRock refers to research by the UN, BlackRock, McKinsey, arguing about the impact of climate risk on global systems that support economic growth.

Climate risk is an investment risk

BlackRock has announced its withdrawal from “anti-sustainable” investments, for example, related to energy coal. The company will conduct a more thorough selection of products related to fossil fuels. The investment vector will be aimed at sustainable development and transparency of activities.

BlackRock stands for the importance of openness of all parties and stakeholders for sustainable work. For long-term profitability, honest, environmentally oriented interaction with shareholders should be conducted. Thus, attracting green investments is becoming more and more effective.

In addition, Fink called for a coordinated international response from the governments of all countries in accordance with the objectives of the Paris Agreement. To unite the interests of business and the state to reduce climate risks.