Victory at the international competition: Ecopolis in the Sakhalin Region

A consortium of HPBS, I&D Architects, Knight Frank, John Thompson & Partners, SPI Planning Group, Concrete Jungle, DA! Architects became the winner of the international competition for the development of the concept of a new city in the Sakhalin Region! 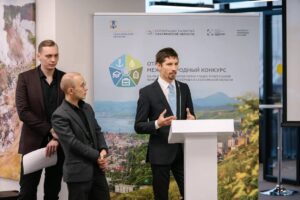 A new Ecopolis city will be built in the south of Sakhalin. The facility will be located 35 km from Yuzhno-Sakhalinsk, the city will have a balanced arrangement of residential, office buildings, and places for recreation and sports. It is also planned to build scientific and educational clusters, universities to attract students and young professionals.

The general director of the company, Ilya Zavaleev, presented to the experts a part of the project developed by HPBS, in which, from the point of view of environmental engineering, a number of effective solutions were proposed.

A large number of landscaping and parks permeate the city of Ecopolis, they will continuously provide the city with fresh air and comfortable environmental conditions.

A large amount of rainfall is used in the city, the use of pipes and treatment facilities is minimized, filtration surfaces, bio-ditches and rainwater collection in houses are used here.

This city will have a positive balance of energy generation from renewable sources, the main energy is generated with the help of wind parks, which are located at a small distance from the city, and the houses are also equipped with solar power plants (their roofs).

The amount of energy produced per year is more than the city consumes, the excess energy is processed into hydrogen using electrolyzers. This hydrogen is further used to heat houses in the winter. The rest of the hydrogen, which is not required, is sold to ships running on hydrogen fuel.

It is also planned to use wave power plants to generate electrical energy and subsequently generate hydrogen.

Recall that the competition area of ​​the project is 942.4 hectares, the participants had to design an environmentally friendly city, adapted to the climate of the Sakhalin region, with modern energy-saving technologies. The project must implement the principles of “LEED for neighborhood development”.

The expert council of the competition is headed by Alexei Rakitskiy, Minister of Architecture and Urban Planning of the Sakhalin Region.

We thank the organizers for the opportunity to participate in such a large-scale project!

An article about us, the results of the competition and Ecopolis was published on the European architectural platform “Competitionline”: